Smile Like Slykhuis. That was the #40 piece of advice I gave to myself on my birthday. For those of us in the basketball world lucky enough to know Jerry Slykhuis, "Slyk's" smile is as synonymous with Snow Valley as Cutthroat.
Jerry loved everyone and everyone loved Jerry. I honestly don't think Jerry slept during the weeks at Waverly and until this year we didn't realize everything he did. Jerry's best friend and partner Don Showalter said it best: "We have to all be at our best this week just to be at Jerry's level."

There are a lot of things that I'll remember about Jerry. Jerry had an energy that was unexplained. For those of you that have never been to Snow Valley, I describe it as this. "It is the most exhausting, fulfilling week of basketball in my year." I've never ran a marathon-don't plan to-but I would compare the feeling on the last day to that. You love the time there, your body hurts, but the reward is worth it. The one constant throughout that week: Jerry's smile.

I didn't know he was a Hall of Fame Coach until after he passed away. Jerry was a great coach, no doubt about it but I didn't know his record proved it. He never mentioned it. He was just Jerry.

Jerry had a sense of humor as well. He could give it out as well as he could take it. Whenever you saw Jerry and Tates laughing you would be tempted to walk up but you risked getting a full on assault from those two.

Jerry had compassion. In 2015 I was going through my divorce. I was at camp and needed to leave. Jerry helped arrange an earlier flight home, stayed up with me to take me to the airport at 4:30am, and gave me great wisdom on that ride. He text me that day and for several days afterwards. The next summer at Snow Valley, my sons were with me and that is one smile I will never forget.


So one of my goals is to Smile like Slyk.


Below are a couple of Facebook posts about him and a picture of that smile.

We love Jerry. We miss him. But when I think about him I smile. 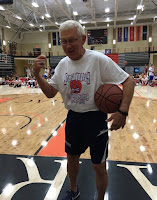 Spent last night talking to & around some of the people I love & care about the most in my life. I smiled a lot and went to bed thankful.
This morning was hard. I, along with others received the news that Jerry Slykhuis & his wife Jane were killed in an automobile accident.
People that know me know my happy place is Waverly, Iowa. That's where Snow Valley Basketball School is held. The last 5 years I've spent a week there learning and teaching. For those that don't know. You get up around 5am, teach basketball from 6:30am-11pm with 3 breaks...and do it again for 4 more days. It's the most fulfilling exhaustion ever.
I made some of my strongest friendships there. I talk to SV guys 365 days a year.
I also went through some life moments there too:
I was hired as the Head Coach at Gravette while I was there. I told Tates, Dave, Show & Jerry. Jerry shook my hand and gave me a hug. They shared in my happiness.
When I was going through my divorce, I went there but needed to leave. Jerry drove me to the airport at 4am and gave me words of encouragement I'll never forget. He text or called a lot that month.
When I accepted the West High job, I sought out advice from SV guys. Especially Jerry.
This last summer Hayden & Evan got to meet Jerry. He treated them like they were the reason they had the camp.
Jerry loved everyone. And we all loved Jerry.
I smile when I think about and go to Snow Valley. I'm going to miss Jerry's smile this summer. I'm so thankful for the time I had with "Slyk".
Rest easy Coach. Thank you for impacting not just my career but my life.
Love your Arkansas buddy,

A week ago right now I was driving somewhere in South Iowa/North Missouri. We just finished our last of 5 days at Snow Valley. It is my favorite basketball week of the year because of the relationships and atmosphere.
I wasn't looking forward to going this year since last December when we loss Jerry Slykhuis.
Jerry was the first smile, hand shake and hug I got every time I arrived. I knew he wasn't there but I caught myself on the first day about to ask what he was doing.
For whatever reason I've been through some of my life's highs and lows while I'm at Snow Valley and Jerry was always there with a smile to celebrate or give an encouraging word. I missed that this week.
This year was one of the best staffs I've been apart of Snow Valley
There was an incredible energy all week.
We all miss Jerry but we what a great week in his honor.
Posted by Greg White at 12:00 PM